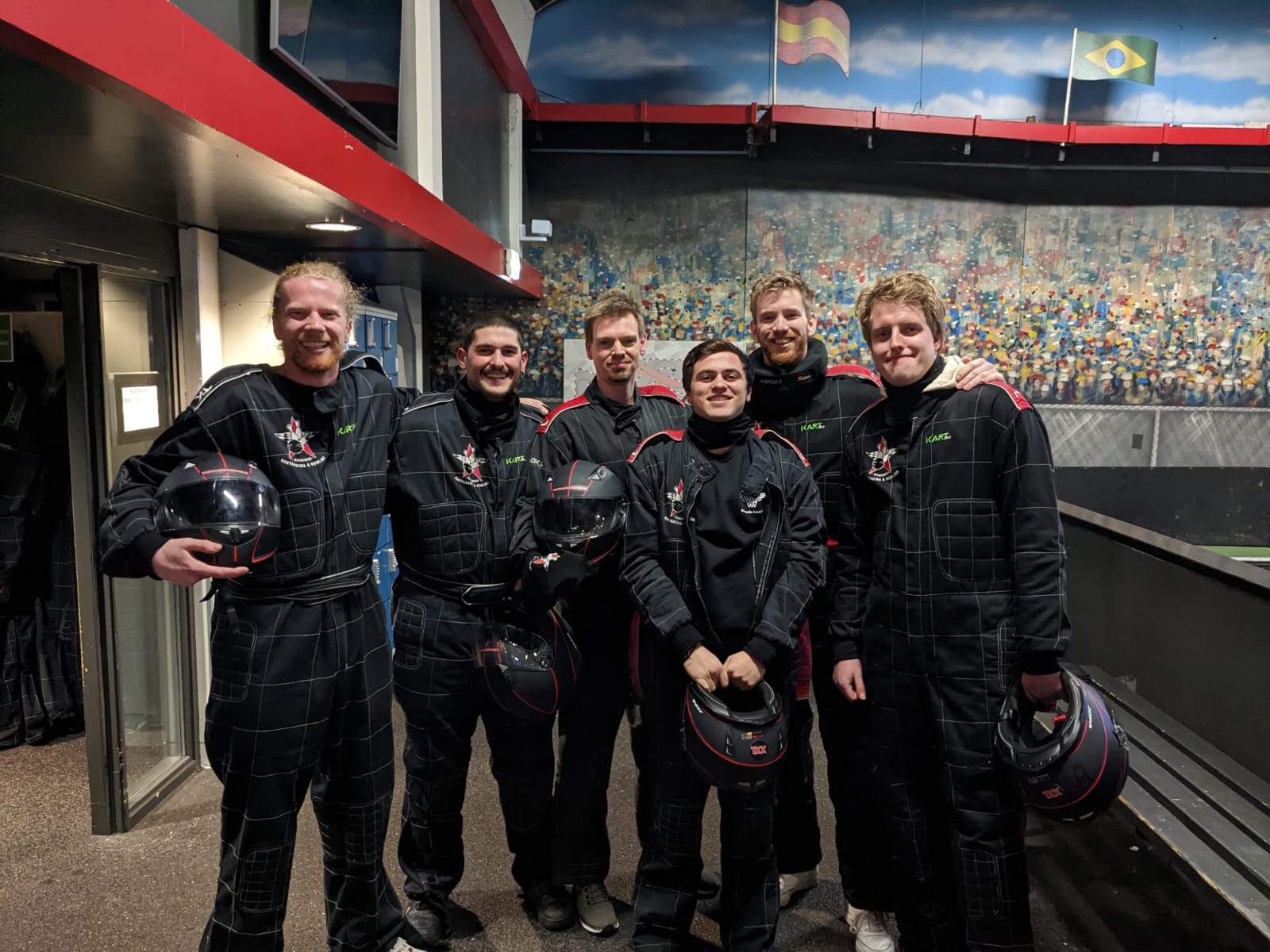 In the 21-22 season, GU mens 2 won the team activity challenge. As their prize, they chose the karting arrangement at Kartracing & Bowling Groningen.

We were expected at the entrance at 20:00. Naturally one of the Italians was late, but when Gabriele finally joined we were ready for our instructions. We would start with a 10 minute qualifying session and after a short break we would compete in a 24 minute race. Whoever was in the lead at the end would be the winner. After suiting up in a racing overall and a helmet, we were ready to get in our karts. The first few laps were tricky since we had to get to know the track. As a consequence the red lights above the track were burning quite a lot which meant someone had spun and we had to slow down. But in the end everyone was able to set a quick time. Pole position was for Menno, who had the most recent karting experience.

After a short break it was time for the race! We started with a running start behind one of the instructors. After one formation lap he left the track and we were racing! Menno, being the speed demon that he is, immediately pulled ahead. Sjoerd (there for reporting purposes) and Lard battled for second place until Sjoerd was able to create a small gap. David had an unfortunate spin which meant Mario and Luigi- … I mean Eduardo and Gabriele were able to overtake him. David would not let that stand and was able to overtake them back to secure his fourth place. Coach Eelco was steadily in seventh place until Menno appeared behind him having already driven a lap more than the rest. After Menno overtook Eelco, Eelco fiercely tried to stay behind Menno. This meant he focussed too much on the car in front and not on the track so he took a turn too fast and hit the wall. Eelco was unfortunately out of the race with a bruised rib. Menno came close to overtaking the whole field but the race was one lap too short for him to overtake Sjoerd in second place.

After the race the top three was celebrated with medals on the podium and a bottle of champagne for Menno Verstappen. After spraying the champagne, we finished with some well deserved beers and snacks in the bar with a nice view on the racing track.

Congratulations to Menno, we wish Eelco a speedy recovery and a big thank you to Kartracing & Bowling Groningen! If you also want to go karting or bowling, check out their website:kartbaangroningen.nl